Who Is Katie Thurston Engaged To? Bachelorette, Age, Net Worth & Facts 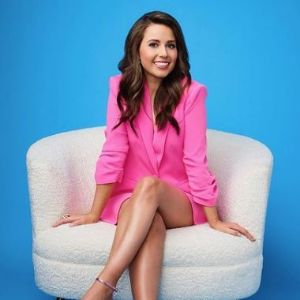 Follow this article to know about Katie Thurston’s The Bachelor and The Bachelorette journey. Also, find out her age, net worth, college, parents, height, and facts.

Katie Thurston is an American television personality best known as the contestant of the ABC dating reality television show, The Bachelor and The Bachelorette. Besides that, she serves as a bank marketing manager.

Who Is Katie Thurston Engaged To? Is Blake Moynes Her Partner?

Katie Thurston is currently engaged to the winner of the 17th season of The Bachelorette, Blake Moynes. In the show which premiered on 7 June 2021, Katie accepted Blake’s proposal and chose him as the winner of the season.

You May Like: Who Is Kaitlyn Bristowe’s Boyfriend? Her Bio, Age, Net Worth & Facts

The Bachelorette star got engaged to Blake, a wildlife manager, on the 9th August finale of the 17th season of The Bachelorette. The surprising yet blissful moment came after Katie ended her romance with Justin Glaze and mourned the brutal end of her relationship with Greg Grippo.

Following their engagement, Katie and Blake were recently caught on a road trip to Canada. The newly-engaged pair documented their road trip up to Blake’s hometown of Hamilton, Ontario, Canada.

During her holiday with her partner, Katie even flaunted her 3-carat oval-shaped engagement ring. The ring had a sparkler set within a crown motif and a hidden halo of 90 smaller diamonds.

Katie Thurston came to the limelight after appearing as a contestant in the 25th season of The Bachelor that aired on 5 January 2021. She fought alongside 36 women for the admiration of the bachelor, Matt James.

Unfortunately, Katie’s The Bachelor run ended in the 6th week. She parted from the show after finishing 11th overall. However, during her time on The Bachelor, Katie became a fan favorite after standing up to the bullying in the house.

Later on 7 June 2021, Katie joined The Bachelorette where she picked Blake Moynes as the winner.

Apart from her work as a reality television personality, Katie serves as a bank marketing manager at First Financial Northwest Bank in Seattle, Washington.

From her versatile career as a television personality and a bank marketing manager, Katie garners a commanding net worth of $214,000.

Born as Katie Lane Thurston on 3 January 1991, the television personality is 30 years of age as of now. She hails from her hometown of Lynnwood, Washington. With American nationality, Katie holds white ethnicity.

Katie is not vocal about the identity of her parents and siblings. However, she once spoke about her dad during her time on The Bachelor.

Talking to Sarah Trott in the show, Katie said;

My dad passed away in 2012, so I 100% encourage you to be with him. If I could get back the minutes I had with him … I understand more than I would like to. Knowing that, yeah, that changes everything. I missed out on my goodbye to my dad.

About 5 feet and 6 inches (1.6 meters) tall in height, Katie completed her high school education at Lynnwood High School. After that, she joined college to pursue her further education.

At Last: How Tall Is Corinne Olympios? The Bachelor, Boyfriend, Wiki, Facts

Some Interesting Facts About Katie Thurston