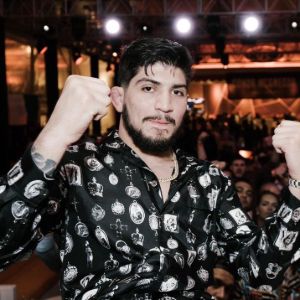 At the early age of 15, Dillon Danis decided to train jiu jitsu, after managing to pull off a choke during a street fight at his school. He has now already made his name in the mixed martial art with number of accomplishments so far.

Dillon Danis was dating a beautiful girlfriend Savannah Montano back in 2020. Get to know his recent dating status, parents, family & personal life here.

Dillon Danis is an American professional MMA fighter, currently competing in the middleweight division at Bellator MMA. He made his professional debut in 2018.

Dillon Danis and his girlfriend Savannah Montano hit the media limelight for their romantic relationship in 2020.

The pair reportedly started dating in 2019. Savannah confirmed their relationship through a YouTube video on her self-titled channel.

However, Dillon and Savannah are no longer together now. The duo ended their relationship some time ago.

Savannah, age 24, was previously linked with some names such as Jared Yarnall and Jessey Stevens. Meanwhile, her ex-boyfriend Jessey was featured in her videos.

Danis was raised by his mother Nikki Danis in Parsippany Hills, New Jersey, United States. However, there is no information regarding his father. He has a sister named Carol and a brother named Bradon.

The athlete is an American by nationality and belongs to white ethnicity. His parents and family background are unavailable in the wiki sources.

Dillon began jiu-jitsu at the age of 15 after he survived a brutal fight in school. He even wrestled for his high school, Parsippany Hills High School.

Later, he started training at Marcelo Garcia Academy in New York City, run by jiu-jitsu icon Marcelo Garcia. After deciding to pursue a career in jiu-jitsu, he began to train full-time with Garcia at his academy.

Danis won some most prestigious tournaments in 2014, which made him earn a black belt on April 13, 2015. He then began working alongside Conor McGregor in 2015.

On 28 April 2018, he made his professional debut against Kyle Walker at Bellator 198. He won the match via submission in the first round.

How Much Is Dillon Danis Net Worth?

Dillon now enjoys a net worth in the millions. He has made astonishing earnings from his MMA career.

Surfing through his social media, Danis is enjoying a lavish lifestyle with remarkable fortune. However, his actual net worth figure is under review for now.

Some Interesting Facts About Dillon Danis