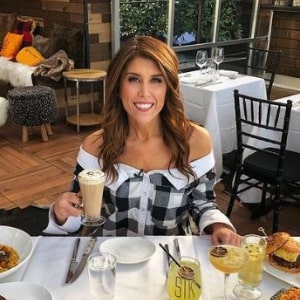 Lauren Scala undoubtedly bags tremendous success for her work as a television reporter. But what about her love life? Is she married? Well, she once joked about having a boyfriend on her Twitter status. But what’s the deal here? Read more to find out!

Lauren Scala is a talented American television reporter who currently serves as the traffic reporter on WNBC’s Today in New York. She is also a features reporter/host of the station’s daily lifestyle show, New York Live.

The 38-years-of-age media personality was born as Lauren Scala on 10 February 1982, in Mineola, New York, United States. She was raised by American parents of Italian roots. Her father John J. Scala was a publicist and historian and her mother was a teacher, who retired after 35 years of service in 2013. She has an elder brother named Mike Scala.

Lauren, who stands at a height of 5 feet 5 inches (1.65 meters), attended Mineola High School in Garden City Park, New York. She then went to Fordham University, where she earned a degree in Communications in 2004.

Her Media Career, Salary & Net Worth

In her early days, Lauren worked in movie studio publicity and events for companies like DreamWorks Pictures, MGM, and Paramount Pictures, and J Records. She started her hosting career at Time Out New York On Demand. Moreover, she worked as an associate producer on numerous New York City-based lifestyle video segments before the channel concluded.

As of now, Lauren serves as the traffic reporter on NBC 4 New York’s Today in New York, a morning news program on the network. She is yet to reveal her annual salary and professional net worth.

Is Lauren Scala Married Or Dating?

@mhp331 Yes! I have been to Pirates Den. My boyfriend owns a house there and it was the first place he took me to eat 🙂

You May Like: Is Royale Da Pregnant Again? Her Husband, Family, Age & Facts

In one of her tweets, she mentioned her boyfriend in July 2018. However, she has not revealed the identity of her boyfriend.

Some Interesting Facts About Lauren Scala