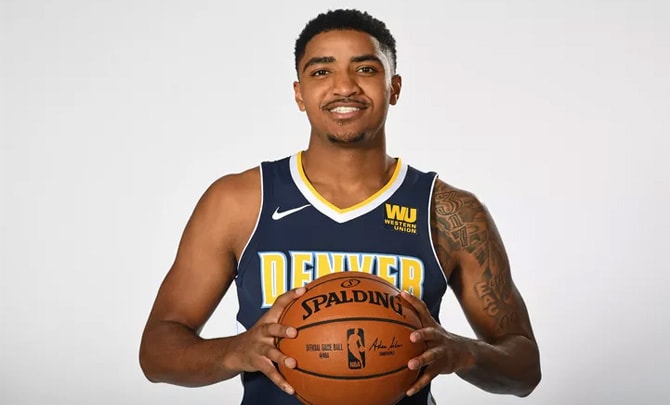 After enjoying a promising college career with Michigan State, Gary Harris made his way into the National Basketball Association (NBA) league as the player of the Denver Nuggets. Since, he records quite worthy stats with his team.

Gary Harris is a mid 20’s basketball player who hypes his position as a shooting guard. The young player initiated his professional career in 2014.

The 25-years-of-age NBA star was born as Gary Harris on 14 September 1994 in Fishers, Indiana, the United States. He is the son of his parents, Gary Harris and Joy Harris. His mother, Joy, is a former basketball player who played in the WNBA for the Detroit Shock in 2000.

Gary stands tall at a height of 6 feet and 4 inches (1.93 m) and was educated from the Hamilton Southeastern High School, Fishers, Indiana. There, he started his amateur basketball career. Eventually, he joined the Michigan State University and played college basketball for around two years.

Gary was selected by the NBA side Chicago Bulls as the 19th overall pick in the 2014 NBA draft on 26 June 2014. However, he was later traded to the Denver Nuggets on draft night. Subsequently, he signed a rookie scale deal with the Nuggets after averaging 18.6 points, 4.2 rebounds, 2.6 steals, and 2.0 assists in five Summer League games for the team.

The newbie made his NBA debut on 14 November 2014 after missing the first seven games of the 2014-15 season following a back injury. For the next two seasons, he represented Nuggets in the NBA Summer League. Later on 12 October 2017, he penned a four-year, $84 million contract extension with the team. Later on 13 December 2017, he scored a career-high 36 points in a 124-118 loss to the Boston Celtics.

Is He Dating Anyone?

As of now, the NBA player remains single and completely focused on his professional career. Besides, no past relationship history of him can be drawn out from the internet sources.

Some Interesting Facts About Gary Harris