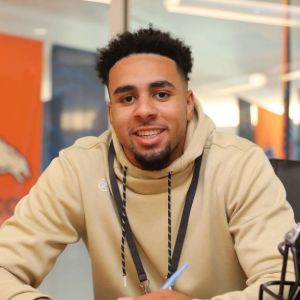 Caden Sterns was just five years old when he declared that he wants to play big football games. Following his outstanding collegiate football at Texas, he is finally drafted by the Denver Broncos of the 2021 NFL draft.

Caden Sterns has amassed millions of fans and being a talented football player. Get to know about his girlfriend, parents & family life here.

Caden Sterns an American football player who plays for the NFL side Denver Broncos. He plays in the position of safety, wearing jersey number #30.

Caden Sterns does not seem to have a girlfriend now.

The NFL player seems to be private when it comes to his dating life. He is active on Instagram with more than 33k followers. There, he often shares posts related to his career.

Sterns is a father of a dog named Ryder. Moreover, he runs the Instagram page of his beloved dog.

Caden was raised by a single mother Brandi Biddy, alongside an older brother named Jordan Sterns. His father separated from his mother, and later she remarried.

Moreover, he has four half-brothers named Josh Sterns, Jamison Sterns, Jerreth Sterns, and James Sterns. Similarly, he has a half-sister named Britanya Sterns and two stepsisters.  All of his brothers played football at their high school and college, respectively.

The 6-foot attended Byron P. Steele II High School in Cibolo, Texas. There, he played football and had 235 tackles and 11 interceptions in his overall career.

Initially, he committed to play college football at Louisiana State University (LSU) but later switched to the University of Texas at Austin.

During three years at Texas, he played 29 games with 28 career starts. Moreover, he had 173 tackles, 8 pass breakups, 5 interceptions, and 2 sacks.

At Last: Does Tarik Cohen Have A Girlfriend? Family & Personal Life Details

Some Interesting Facts About Caden Sterns