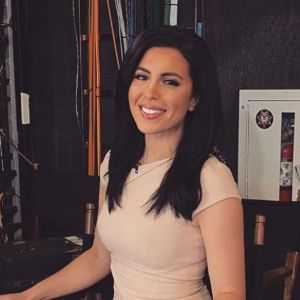 When it comes to personal life, Sara Donchey prefers to maintain privacy. The mother of one has been enjoying both her professional and personal life with a muscular husband so far.

Sara of age 31 was born in 1989 in Los Angeles, California the United States. Her birthday falls on 8 April and her birth sign is Aries. She was raised by her parents in Diamond Bar, California. Her family consists of her parents and a sister. An American by nationality and Hispanic by ethnicity, she is proud to call Southern California home.

Donchey attended Diamond Bar High School in her hometown. After high school, she went to San Francisco State University and earned a degree in Print and Online Journalism. At college, she worked as both the Online Managing Editor and the Editorial Cartoonist for the student-run Golden Gate Xpress.

Her Journey To KCAL9

Sara began her career as a production assistant for the CBS-owned-and-operated station KPIX 5 in San Francisco. Afterward, she worked as a multimedia journalist for KRIS-TV and KZTV, a duopoly station in Corpus Christi, Texas.

While working there for two years, she anchored the weekend evening newscasts and regularly contributed to the morning, noon, and weekday evening broadcasts. In 2015, she joined NBC-affiliated KPRC-TV and began to work as an anchor and reporter. At KPRC-TV, she anchored the newscast and traveled across the country to cover numerous sports events.

In 2019, Donchey joined KCBS-TV Channel 2 and KCAL-TV Channel 9 in Los Angeles. As of now, she works as a reporter and anchor for the stations.

Well, the 31-year-old has been relishing a married life over the years. Not much is known about the wedding date and she is yet to reveal the identity of her husband.

Sara often shares pictures of her muscular and tattooed husband on social media. In June 2018, she revealed from her social media account that she is expecting a baby with her husband.

Later, she welcomed a baby boy, and the identity of the baby is still inside the shadow. She now resides with her husband and baby along with Doberman Pinscher named Hiwa.

Sara rarely shares Instagram snaps that has anything to do with her husband and baby boy. The little one is still in his growing phase and both Sara and her husband have been fulfilling their parenting role with utmost priority. However, the real name of her husband and his likely profession is still kept hidden from her bio. It is must her husband’s reticent personality that keeps his away from sharing anything or his possibly social media presence in the public.

Some Interesting Facts About Sara Donchey