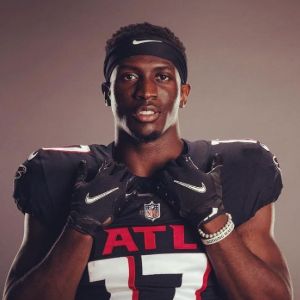 Olamide Zaccheaus is now proving his worth at the NFL. The St. Joseph’s Preparatory School graduate was a highly acclaimed receiver at Virginia University and is on the verge of being one of the top receivers of the Atlanta Falcons so far.

Does Olamide Zaccheaus have a girlfriend? Get to know his dating status, parents, family & NFL career facts here.

Olamide Zaccheaus is an American football player who plays for the NFL side Atlanta Falcons. He plays as a wide receiver, wearing jersey number #17.

Olamide Zaccheaus does not seem to have a girlfriend for now.

The NFL player has kept his dating life away from the media eyes. He is active on Instagram with over 13k followers.

However, Zaccheaus has not shared a clue regarding his possible girlfriend and dating life. He is now focused on his career so far.

Yimbra got her green card in a June 1994 lottery and became a U.S. citizen. However, his parents separated because his father was abusive towards his mother. He is especially close to his mother.

Zaccheaus grew up with his family in Plainfield, New Jersey, United States. He has an elder brother named Olawole Zaccheaus. Olawole is two years elder than him.

Olamide attended St. Joseph’s Preparatory School, where he played both running back and defensive back. After graduating, he went to the University of Virginia and played college football there.

The 5-foot-8-inch played for the Virginia Cavaliers for four seasons. He had 250 receptions for 2,753 yards and 22 touchdowns while also rushing 79 times for 551 yards and two touchdowns in 50 games for the Cavaliers.

The Atlanta Falcons signed him as an undrafted free agent on 27 April 2019. Subsequently, he made his NFL debut on October 13, 2019, against the Arizona Cardinals.

How Much Is Olamide Zaccheaus Salary?

You May Like: Who Is NFL Myles Gaskin’s Girlfriend? His Age, Parents & Facts

There is no doubt that his salary will increase with the increase in his performance so far.

Some Interesting Facts About Olamide Zaccheaus