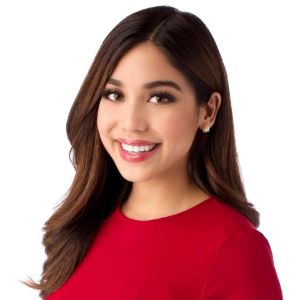 Inspired by the phrase “Journalism gives voice to the voiceless.”, Natasha Zouves is the combination of talent and beauty which keeps her intact for long on media. After a year of recovery rest from her head injury, she shared her experiences with her fans.

The American journalist Natasha Zouves has been contributing to the media since 2010. Starting her journey as an intern in an American first-run syndicated news broadcasting magazine Entertainment Tonight., she has worked in various prestigious TV channels.

The young media personality was born in June in the United States. However, her exact date of birth is yet to be known.

Talking about her parents, both of her parents belong to the medical field, according to some wiki sources. Natasha has supported her mother, Mariyam Zouves, who worked really hard to earn her medical degree.

She shares some of her snaps with her parents on her Instagram.

Being American by nationality, she is of Greek and Chinese descent.

She graduated Phi Beta Kappa (the oldest academic honor society) from the USC Annenberg School for communication and journalism, with a double major in broadcast journalism and health promotion and disease prevention.

Natasha earned her master’s degree of science in biotechnology enterprise and entrepreneurship from Johns Hopkins University in 2020.

With the thirst for media exposure in 2013, Natasha grasped a big opportunity starting as an anchor and reporter at San Diego’s KGTV (10News-ABC) until 2015.

She joined San Francisco’s KGO-ABC7 News in 2015, and she has handled the responsibility of reporter and morning anchor.

Later in 2019, Natasha left ABC7 after being selected for the 10-month fellowship in the John S. Knight Fellowship at Stanford University.

Natasha endured a serious concussion in 2018 after finishing a newscast. She was on rest for more than seven months. She finally returned to work after her recovery in 2019.

Describing her phase of concussion, she says, “The damage to the nerves and brain caused me to lose my sense of taste and smell. Even the food I loved most was like cotton in my mouth. This loss felt deeply personal and was two-fold, both the obvious lack of flavor and also the memories those scents triggered.”

The young and beautiful Journalist tries to keep her personal life away from the spotlight.  As she has not revealed any information regarding her boyfriend and relationship, she is possibly single.

However, Natasha is living her dreams and passion; she might just focus on her establishing career.

At Last: Is Jill Nicolini Married? Her Age, Net Worth, Family, Children & Facts

Some Interesting Facts About Natasha Zouves