Who Is Matilda Castren Partner? Her Dating & Family Life Insight 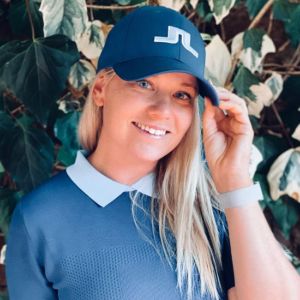 Matilda Castren became the first player from Finland to win on the LPGA Tour after winning the Mediheal Championship in 2021. She is now emerging as a new LPGA talent after beginning her professional career in 2017.

Matilda Castren first met her American boyfriend back in 2018. Get to know her dating life, parents, family, ethnicity, net worth & facts here.

Matilda Castren is a Finnish professional golfer who currently plays on the LPGA Tour. As of September 2021, she ranks #46 in the Rolex Women’s World Golf Rankings.

Who Is Matilda Castren Boyfriend?

Matilda Castren is now relishing her romantic life with her boyfriend Daniel Moreno.

However, there are no more details regarding her partner Daniel. According to his Instagram, Daniel is in the military profession.

Matilda and her boyfriend Daniel first met in Helsinki in 2018. Later, they moved to San Diego and settled there in 2019.

In her spare time, the golfer loves exploring exotic locations with her partner.

Castren often shares pictures with her boyfriend evincing their love life on Instagram. She has amassed more than 17k followers on her Instagram.

Born on 18 January 1995 in New York, United States, Matilda Castren is 26 years of age now. She was born in the United States but belongs to Finnish nationality.

Castren is the daughter of Finnish parents Petri Castren and Anne Castren. Petri is a businessman in Finland whereas her mother Anne is a school teacher.

The golfer spent her childhood in Connecticut and Dallas, Texas, and later went to Finland with her parents. Her father was employed by a Finnish bank while in the United States.

Matilda belongs to the Caucasian ethnicity. She is of European descent from her parents’ side.

Castren with a height of 5 feet 7 inches attended Haukilahti Secondary High School in Finland. She graduated from Florida State University at age 22 with a degree in International Affairs on 6 May 2017.

Matilda was introduced to golf by her parents at the age of five. She played in her first competitive tournament at the age of 10.

From 2014 to 2017, she played college golf at Florida State University, winning seven individual titles in collegiate competitions. She turned professional in 2017.

Castren played on the Symetra Tour in the 2018 and 2019 seasons. She earned her card for the 2020 LPGA Tour after finishing T26 at the LPGA Final Qualifying Tournament.

How Much Is Matilda Castren Net Worth?

Matilda Castren has garnered a remarkable net worth from her golf career. Winning prize money from different tournaments has contributed to her net worth so far.

However, her actual net worth is still under review.

Some Interesting Facts About Matilda Castren