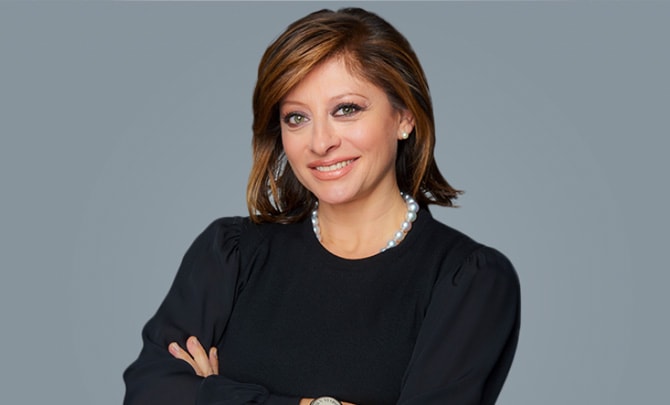 The native of Brooklyn, New York City, Maria is the prominent name in the field of journalism. With respect to her professional achievement, she is relishing two decades of married life with her investment manager husband so far.

American television journalist Maria Bartiromo has been taking multiple responsibilities as an anchor, magazine columnist, and author. She now anchors news and business program, Mornings with Maria and appears on Sunday Morning Futures, the most-watched Sunday morning program on the network.

Maria Sara Bartiromo was born on 11 September 1967 to parents Vincent and Josephine Bartiromo. Her father Vincent was the owner of the Rex Manor restaurant in Brooklyn and her mother served as a clerk at an off-track betting parlor. She grew up with a brother and a sister in the Bay Ridge section of Brooklyn in New York City.

Bartiromo with a height of 5 feet 5 inches (1.65 m) attended Fontbonne Hall Academy in Bay Ridge. Soon after, she went to New York University and graduated with a Bachelor of Arts degree with majors in journalism and economics.

During the internship, Maria worked as an executive producer and assignment editor with CNN Business News for five years. Later, she joined CNBC in 1993 and started to cover the news from the New York Stock Exchange.

Bartiromo served as an anchor and managing editor of the business interview show, On the Money with Maria Bartiromo on the network. The other shows include Business Center, Market Wrap, and Closing Bell. After working for twenty years, she joined the Fox Business Network as Global Markets Editor in 2014. As of 2017, she has been anchoring its weekly primetime investing program, Maria Bartiromo’s Wall Street.

Apart from television work, she is an author, who have penned several books. Bartiromo published her first book, Use The News: How To Separate the Noise from the Investment Nuggets and Make Money in Any Economy Maria Bartiromo in 2001. Similarly, the other books include Choosing and Using a Broker Maria Bartiromo and The 10 Laws of Enduring Success.

It has been more than two decades since the beginning of Maria’s journalism career. The award-winning media personality earns a hefty salary that reaches her net worth in millions.

Meanwhile, her husband Jonathan is a successful investment manager. The value of the total assets of his company is already in billions.

The 51-year-old is currently relishing married life with her husband of twenty years, Jonathan Laurence Steinberg. Maria and Jonathan exchanged their wedding vows at a Jewish ceremony held on 13 June 1999 in Quogue, New York.

Jonathan, aged 54 is a founder and the as Chief Executive Officer of WisdomTree Asset Management, a fund management company based in New York. However, the couple does not bear any children from their relationship. Both of them are workaholics without any children so the outside distractions are fewer.

Well, surfing through her Instagram account amassing more than 53k followers, it is not difficult to find out her dedication towards her profession so far.

Some Interesting Facts About Maria Bartiromo