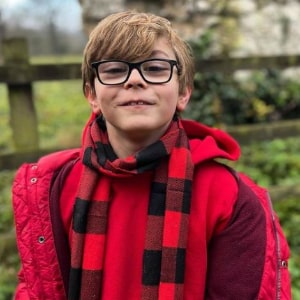 At this young age, Julian Hilliard is already racking up his professionalism in the acting world. In his short and impactful career so far, Julian has bagged a handful of award nominations for his TV and movie works, including a nomination at the Young Artist Awards.

Julian Hilliard is an American child actor who is best known for his role in Netflix’s 2018 horror series, The Haunting of Hill House. The show earned him a nomination a the 2019 Young Artist Award for Best Performance in a Streaming Series or Film: Young Actor.

How Old Is Julian Hilliard? His Bio, Age, Parents, Height

The 9-years-of-age actor was born with the name Julian Hilliard as a single child of his parents, Justin Hilliard and Arianne Martin, on 20 June 2011. He hails from Dallas, Texas, the United States.

Speaking about his family, Julian’s mother, Arianne, is an accomplished actress with credits in films and television. Likewise, his father, Justin, has produced and directed a number of films and documentaries. The child actor holds white ethnicity and his birth sign is Gemini.

Julian stands tall at a height of 4 feet and 5 inches (1.3 meters). He weighs 73 pounds (33 kg) and possesses honey brown-colored hair and brown eyes.

His Career In Movies & TV Shows, Net Worth

Julian began his professional career with the 2018 comedy-drama movie, Never Goin’ Back. The same year, he landed the major role of Young Luke in the Netflix horror web series, The Haunting of Hill House.

Furthermore, Julian has been part of several other movies like Greener Grass (2019) and Color Out of Space (2019). His recent television appearances came with Penny Dreadful: City of Angels as Tom Craft in 2020 and as Billy Maximoff in the Marvel mini-series, WandaVision (2021).

As of now, Julian is filming for the third installment of The Conjuring, where he will make an appearance as David Glatzel. The young actor’s professional net worth still remains under review.

Is Julian Hilliard Dating Anyone?

Well, Julian is too young to be part of any dating and relationship affairs. He is new to the entertainment world and right now fully focused on making the most out of his start.

Meantime, Julian loves hanging out with his friends and series cast when he is not acting. He is very close to his The Haunting of Hill House co-star, Violet McGraw.

Some Interesting Facts About Julian Hilliard