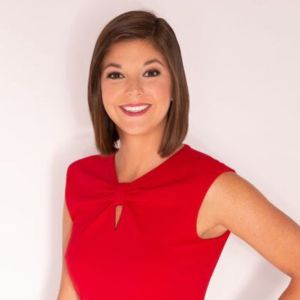 Growing up at her family farm in Frederick County, Amelia Draper never thought to be a meteorologist at an early age. She has now held experience in weather forecasting on prominent media platforms so far.

Amelia Draper and her husband are soon-to-be the parents of a child. Get to know her married life, family, age & career facts here.

Amelia Draper is an award-winning meteorologist, who currently works with StormTeam 4 at NBC4 WRC-TV in Washington, DC. Her weather forecasts during the evening editions of News4, on NBCWashington.com, and 103.5 WTOP Radio.

Who Is Amelia Draper’s Husband?

The meteorologist is married to Matthew for more than four years. The couple tied the wedding knot on 7 May 2016.

Amelia revealed the news through one of her Tweets on 11 May 2016. There, she stated that she is going to start a new life after marrying her best friend.

Not much is known about her husband than they were known to each other over the years. Despite being active on social media, she has not shared any photos with her husband. However, some wiki sources suggest that she currently resides with her husband in Washington, DC.

You May Like: Is Jennifer Franco Married Now? Her Net Worth, Age, Husband, Wiki, Facts

Amelia and her husband are soon-to-be parents of their first child.

If you were watching News 4 at 5PM today, you caught my special announcement! Thanks to @DoreenGentzler and @AimeeCho4 for helping me to break the news. Here’s the exciting (unplanned) moment: https://t.co/0aFDuVweSV

The journalist revealed the exciting news in front of the viewers in June 2021. She is set to welcome a new family member in October 2021.

Draper is now enjoying her journey to motherhood.

Amelia celebrates her birthday on the 11th of December every year. However, her actual birth year and age are nowhere found in the wiki sources.

Meanwhile, her maiden name is Segal. She was raised by her parents Dave Segal and Mari Segal in Frederick, Maryland, the United States. Moreover, her parents were involved in farming and had horses, chickens, and peacocks on their Middletown farm.

Since it’s #NationalSiblingDay and my younger brother didn’t answer my nice text wishing him so … I’m going to do what any loving older sister would do. Post some adorable photos of him (us) from yesteryear! pic.twitter.com/PxH86YymKr

Draper spent her early age at her family farm in Frederick County with a younger brother named Graham Segal. She attended Middletown High School and graduated in 2004. Afterward, she went to Penn State University, where she earned her degree in meteorology.

Her Journey To NBC Washington

Amelia had her first job in college with CNET, an access television channel for Centre County, Pennsylvania. While working there in weather forecasting, she became quite familiar with weather phenomena such as lake effect snow.

Draper then landed the job as the weekend meteorologist for WJET/WFXP in Erie, Pennsylvania. After working for two years, she moved to Buffalo and joined the morning shift at WIVB-WNLO in 2010. There, she worked three years before joining NBC4 WRC-TV in Washington, DC.

As of now, she works as a meteorologist with StormTeam 4. Similarly, her forecasts can be seen during the evening editions of its News4 and on 103.5 WTOP Radio.

Some Interesting Facts About Amelia Draper