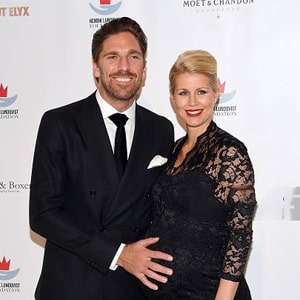 Therese Andersson got married to a famed Swedish professional ice hockey goaltender in 2011. They initially met in Sweden in the year 1998. Since their nuptial bond, the couple co-parents two kids together.

Therese Andersson is best known as the wife of Swedish ice hockey player, Henrik Lundqvist. Her husband currently plays as a goaltender for the Washington Capitals of the National Hockey League (NHL). For his professional stints, he amasses a hefty net worth of $35 million.

Recently, Henrik announced in December 2020 that he will undergo open-heart surgery. According to him, the surgery is for “aortic valve replacement, aortic root, and ascending aortic replacement.”

It means that he won’t be playing for the upcoming season.

Lundqvist is now recovering from open-heart surgery and is back in New York from Cleveland. He even revealed his health condition through a video posted on his social media account.

The pair first met eyes with each other in 1998, while Henrik was playing for Frölunda HC in the Swedish Elitserien. During that time, Henrik was exceptional as he broke many records and became the best goalie in the league.

Though they met in 1998, it took them a long time before the pair commenced their romance and decided to give their relationship a new height.

2. Therese And Henrik Married In Summer 2011 After Getting Engaged In 2011

After Henrik moved to the United States to pursue his NHL career, he started earning massive media recognition. Soon, his personal life became a highlight. His fans wondered who he was dating and if he was married or single.

Well, it didn’t take long before his fans knew about his girlfriend, Therese Andersson. They got engaged in December 2010 after Henrik surprised Therese with a huge diamond ring and a surprise party. The two lovebirds went on to share the wedding vows in the Summer of 2011.

The couple lived in White Plains, New York, before moving to Manhattan. They spend 10 months a year in the Big Apple.

Therese Andersson and Henrik Lundqvist are the proud parents of two wonderful kids, both daughters. Their first baby girl, Charlise Lundqvist, was born on 10 July 2012, which makes her now 8-years-of-age. The arrival of their first child brought immense happiness in the couple’s life.

Time to figure out what’s next… pic.twitter.com/IlmSdxeAG0

Eventually, in 2014, the Lundqvist family was blessed with more happy news as Therese found out that she was pregnant with the pair’s second child. They soon welcomed their second daughter, Juli Lundqvist, on 20 March 2015.

4. There Were Rumors That Henrik Cheated On Therese With Swedish Model Victoria Silvstedt

Back in 2005-2006 when Henrik first moved to New York City, rumors spread that he was cheating or broken up with Therese after being seen with Swedish model, actress, singer, and television personality Victoria Silvstedt.

Victoria was married to CBS 2’s Chris Wragge at the time (2000-2007). However, those rumors didn’t amount to much as they both were only friends and Henrik was going steady with Therese. On top of that, Therese stuck with Henrik’s side and the matter became normal after some time.

Therese Andersson is one of the founder members of the Henrik Lundqvist Foundation along with her husband. It is a non-profit organization that focuses on health and education for children and families.

The Henrik Lundqvist Foundation has community partners in New York City, Sweden, and the Dominican Republic.  It hosted its inaugural fundraising event on 15 September 2014, at Refinery Rooftop.

The HLF #YoungAmbassadors have an important message for all the essential workers showing up and keeping us safe as we fight this pandemic. #thankyou #weareallinthistogether pic.twitter.com/bXNquNdGAL

The event included a silent auction, a Q&A session hosted by NHL Network’s Kevin Weekes, and an acoustic performance by Henrik Lundqvist and bandmate John McEnroe.

HLF also supports the Garden of Dreams Foundation which is a non-profit organization that focuses on children facing obstacles and helps them get through.

Her husband, Henrik Lundqvist, commenced his professional ice hockey career in 2000. He then ringed his NHL career in 2005 after joining the New York Rangers. He played for the Rangers till 2020 before penning a one-year, $1.5 million contract with the Washington Capitals on 9 October 2020.

Feels good to be back on the ice at the training center again?? A lot of unknown right now but hockey is fun, I know that! ? #LGR pic.twitter.com/wcjwNEOdJQ

In his long-haul career, Henrik has bagged some impressive professional records. He is the only goaltender in the NHL history to record 30 wins in each of his first seven seasons. Likewise, he has the most wins (449) by a New York Rangers goaltender. Henrik also holds a record of most wins by a European-born goaltender in NHL history.

At Last: Who Is Jim Toth? 6 Facts to Know about Reese Witherspoon’s Husband

Similarly, Henrik holds a Winter Olympics record for consecutive minutes without allowing a goal i.e., 172 minutes and 34 seconds from 2006 to 2010.