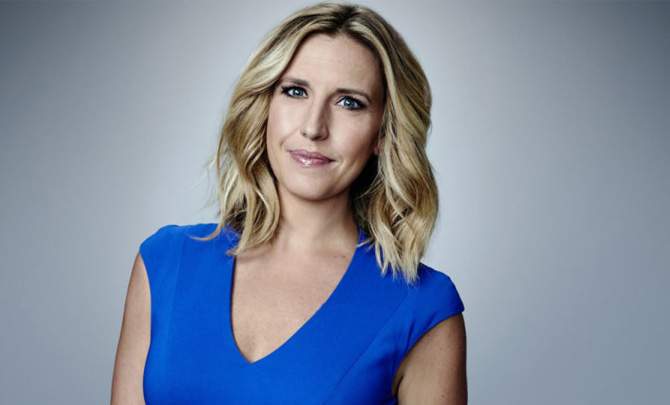 The married life of an award-winning CNN journalist Poppy Harlow’s married life is as smooth as her professional life. She is also a proud mother at home, raising two kids with her manager husband so far.

Poppy Harlow is an American journalist, currently serving as a New York-based correspondent for CNN. Besides, she appears as a co-anchor on the 9-11am ET edition of CNN Newsroom from Monday to Friday alongside Jim Sciutto.

Katharine Julia Harlow was born on 2nd May 1982 to parents James Lee Harlow and Mary Louise Baird. She was raised by her family in Minneapolis, Minnesota.

Initially, Poppy worked for CBS MarketWatch and as an assistant producer for CBS Newspath. Later, she became an anchor and reporter for NY1 News’ Local Edition. She also worked as an anchor, reporter, and producer for the Forbes.com Video Network.

In 2008, Harlow joined CNN and started to serve as the anchor for CNNMoney.com. Moreover, she reported for CNN, CNN International and HLN. She became a New York-based CNN correspondent in April 2012. As of now, she anchors CNN Newsroom from Monday to Friday alongside Jim Sciutto. In addition, she hosts the CNN Podcast, BossFiles with Poppy Harlow.

Well, the CNN personality has amassed her net worth significantly from her journalism career. She deserves a six-figure salary for her role in the media line.

The 37-years-old currently shares the marital relationship with husband Sinisa Babcic. The couple exchanged the wedding on 1 September 2012. Sinisa, aged 37 currently serves as a Senior Manager in the Advisory Services practice of Ernst & Young LLP. The firm based in New York is focused on Wealth and Asset Management.

Poppy and Sinisa are the parents of two kids now. Their first child, a baby daughter named Sienna Babcic was born on 11 April 2016. Similarly, the couple welcomed a baby boy, Luca James Babcic on 6 February 2018.

Some Interesting Facts About Poppy Harlow