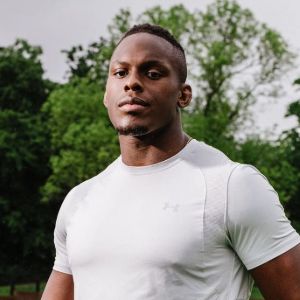 Maro Itoje is shining in the Gallagher Premiership being one of the best rugby players in the country. The Saracens player has been playing with the England team and also toured with the British & Irish Lions.

Does Maro Itoje have a girlfriend or wife? Learn about his dating status, personal life, family, ethnicity, career, net worth & facts here.

Maro Itoje is an English professional rugby union player who plays for Gallagher Premiership side Saracens and represents the England national team. Basically, he plays as a lock or as a blindside flanker.

Itoje is yet to reveal his girlfriend and dating status. He is a private guy when it comes to his personal life.

The player does not seem to be involved in any relationship so far.

Maro is currently unmarried and does not have a wife. He is enjoying his career as of now.

However, he mentioned a Twitter user named Lottie Phillips as his wife back in 2012. It was nothing more than his hilarious tweets so far.

You May Like: Who Is NFL Jordan Miller Wife-To-Be? Inside His Dating Life

Itoje was born to parents Efe Itoje and Florence Itoje on 28 October 1994. His parents are from Nigeria and came to the United Kingdom for a new beginning.

Maro’s father Efe worked for oil and gas company BP as an oil consultant, specializing in the Niger Delta area of Nigeria.

The 27-year-old has an elder brother named Jeremy Itoje and a sister named Isabel Itoje. He grew up with his siblings in the London Borough of Camden, London.

Itoje is British Nigerian by ethnicity and English by nationality. An art lover, he presented art exhibition in London exploring Africa’s contribution to world culture in April 2021. Likewise, his mother Florence worked as a property trader.

Maro began playing rugby at the age of 11 and began his career at college. He penned his first professional contract with Gallagher Premiership side Saracens in 2012.

The 6-foot-5-inch made his debut for Saracens in the 2013–14 season in the Anglo-Welsh Cup. In the same year, he made his Gallagher Premiership debut when he was just 19.

Internationally, he has won three Six Nations Championship titles with England. He has toured with the British & Irish Lions in 2017 and 2021.

How Much Is Maro Itoje Net Worth?

Itoje enjoys a net worth of millions from his rugby career. He reportedly earns a salary of £825,000 per year.

The blindside flanker is one of the highest-earning rugby players in the world.

Some Interesting Facts About Maro Itoje