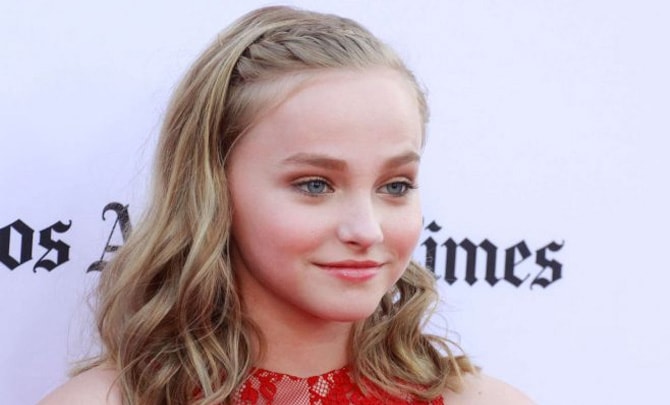 What is the perfect age for you to shine in the entertainment industry? When you ask Madison Wolfe, she will say before you turn 10. She was yet to turn teen when she made her acting debut in 2012.

Madison Wolfe is a young American actress best known for her role in the horror flick, The conjuring 2. At this young age, she has already starred in nearly 20 movies and TV series.

The 16-years-of-age actress was born with the name Madison Wolfe on 16 October 2002 in Metairie, Louisiana, United States. She is one of two daughters of her parents, Tom Wolfe and Tracy Wolfe. Madison has a sister named Meghan Wolfe, who is also famous as an actress.

Standing tall at the height of 5 feet and 2 inches (1.59 m), Madison was interested in acting from a young age. Eventually, she bagged a big break at the age of nine.

The young actress’s net worth is estimated to be around $1 million. She landed a major career break as Dodie Lee in the 2012 adventure-drama movie, On the Road. Madison enjoyed a privilege to share the screen with Amy Adams in the movie.  The same year, Madison appeared in a political satire comedy film, The Campaign.

Madison made her small-screen debut with the American anthology crime-drama series, True Detective, in 2014. She starred in six episodes of the show that featured Matthew McConaughey and Woody Harrelson. Her other TV appearance came as Julie Shepard in the period-drama series, The Astronaut Wives Club, in 2015. Madison later appeared as Janet Hodgson in the 2016 supernatural horror movie, The Conjuring 2.

Madison Wolfe as Janet Hodgson on The Conjuring 2 (Picture: IMDB)

You May Also Like: Know About Aubrey Anderson-Emmons; Net Worth, Age, Parents, Boyfriend

Is She In Relationship?

Madison Wolfe is yet to disclose her personal life on the media platforms. She is still in her teens and basking on a soothing professional career right now. She seems focused on building her acting career while keeping a distance from dating and relationship life.

Some Interesting Facts About Madison Wolfe