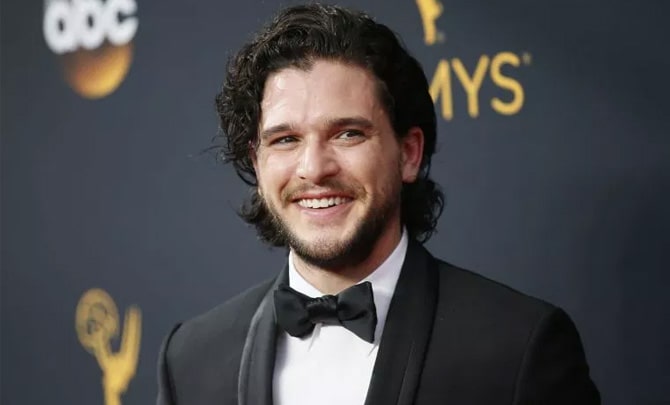 From being called a ‘bastard’ to the ‘King In The North,’ you have known the journey of Kit Harington as Jon Snow in arguably the greatest series ever made- Game of Thrones. While not just the monumental fame, the series also gifted Kit with a beautiful wife.

Largely appreciated for his prominent role on Game of Thrones, Kit Harington commenced his acting journey in 2008. With over a decade in this field, the talented English actor has tasted compelling success across TV and movies.

Kit Harington, age 32, was born on 26 December 1986 in Acton, London, to the 15th Baronet and a businessman father, Sir David Harington, and a former playwright mother, Deborah Jane. Though you may get confused with his GOT character name, he was born as Christopher Catesby Harington.

Kit grew up in a very popular family which is referred to be ancient with the likes of his patrilineal great-grandfather, Sir Richard Harington, and 14th Baronet uncle Sir Nicholas John Harington. He studied at the Southfield Primary School from 1992 to 1998 and later moved to Worcestershire with his family. There, he joined the Chantry High School in Martley and studied until 2003.

The GOT actor subsequently enrolled at Worchester Sixth Form College, where he studied Drama and Theatre from 2003 to 2005. Standing at a decent height of 5 feet 7 inches (1.73 m), Kit graduated from the Central School of Speech and Drama in 2008.

Three years after initiating his acting gig, Kit landed his first television role as Jon Snow in the HBO epic fantasy series, Game of Thrones in 2011. Acclaimed as one of the finest creations and most popular characters in the show, Kit Harington-portrayed Jon Snow turned up to become a series lead since the fourth season.

Beginning as a permanent outsider and often called as a Ned Stark bastard, Jon Snow went on to rule over the North as a worthy king as the series concluded its sixth season. However, the fans got to know the real identity of Jon Snow at the end of the seventh season, when he was just sharing a sensual moment with the Mother of Dragons portrayed by Emilia Clarke.

As the epic series is counting down towards its final season (premieres 14 April 2019), it will be fascinating to see whether the fan favorite, Jon Snow, claims an Iron Throne or not.

More From Game of Thrones: Know About GOT Maisie Williams; Age, Net Worth, Height, Boyfriend

Other TV And Movies, Net Worth

With more than a decade in the entertainment field, Kit Harington enjoys a promising net worth of $12 Million. Besides, his outrageous $1.1 Million per episode earnings from Game of Thrones puts him among the highest paid series actors including Lena Headey and Nikolaj Coster-Waldau.

Put aside gigantic fame and fortune for a while! The other major gift of Game of Thrones to Jon Snow, sorry, Kit Harington is his wife of less than one year, Rose Leslie. Cast as Ygritte in the series’ second season, Scottish actress Rose had a romantic fling with Jon Snow despite claiming he knew nothing. Within no time, the on-screen romance replicated in the actor pair’s real life as well.

Kit and Rose remained on and off with their relationship before publicizing it in 2016. Following that, the pair announced their engagement on 27 September 2017. Less than a year later, the couple exchanged wedding rings on 23 June 2018 at the Rayne Parish Church in Aberdeenshire, Scotland. The beautiful ceremony lightened up with the presence of prolific actors Peter Dinklage and Emilia Clarke.

Some Interesting Facts About Kit Harington