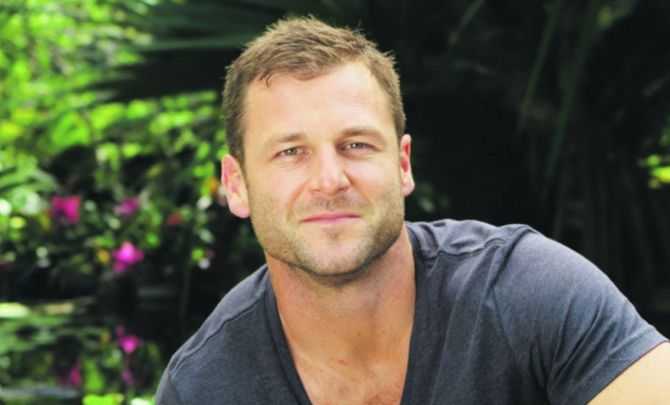 Fans recognize Dave Salmoni from his quality of affability with dangerous wild animals on various TV shows. Beyond the camera, he is a married man and a father of two children.

Dave Salmoni is a Canadian animal trainer, who has been appearing on TV shows such as Deadly Islands and Big, Small & Deadly. Besides, he has his own production company, Triosphere based in South Africa that specializes in wildlife documentaries and shows.

Dave was born on 4 September 1975 to Canadian parents in Sarnia, Ontario. His father was a chemical Scientist and his mother was a competitive figure skating coach. He is the middle child of his Canadian parents and grew up with an older brother and a younger sister named Kerry. He had a lot of pets in his home always loved them.

Salmoni with a height of 6 feet 3 inches (1.91 meters) studied zoology at the Laurentian University in Sudbury, Ontario. There, he wrote his undergraduate thesis on tracking the hibernation of Alaskan black bears. Likewise, he also studied at Northern Collegiate Institute and Vocational School.

Dave started to work as an animal trainer at Bowmanville Zoological Park in 1988.  Eventually, he left Canada and moved to South Africa for the controversial Tiger “rewilding” project in 2000.

Similarly, he hosted a reality series Expedition Impossible on ABC in 2011. Some of his TV shows include Jimmy Kimmel Live, Into the Lion’s Den, After the Attack, and Great Animal Escapes. Similarly, he hosted the second season of a reality show, Game of Homes. Recently, he appeared in the documentary series Big, Small & Deadly in 2019.

How Much Is Dave Salmoni’s Net Worth?

Related: Who Is Wolf Blitzer’s Wife? His Married Life, Family & Net Worth Details

The 45-year-old has been married to Debra Salmoni for more than four years. Well, the two lovebirds exchanged the wedding vows on 13 June 2015. They started dating in 2013 and eventually got engaged in early 2015.

Dave Salmoni and his wife Debra Salmoni has been together for more than six years (Picture: Debra’s Instagram)

Debra of 35 years old has been involved in designing for more than a decade and also works as a designer on Scott’s Vacation House Rules on HGTV. She often posts pictures related to housing interior designing on her Instagram.

The couple shares two kids from their relationship. Their first child; a son named Thomas was born in August 2015. Later, they welcomed a second child as a daughter named Elizabeth.

Some Interesting Facts About Dave Salmoni