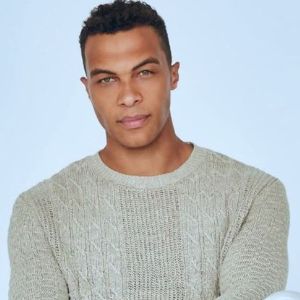 Dale Moss is a former American football wide receiver, who signed with the Green Bay Packers as an undrafted free agent in 2012. He is the contestant on the 16th season of the ABC reality dating competition show The Bachelorette.

Dale Moss Jr. was born on 24 September 1988 in Brandon, South Dakota, the United States that makes him 31 years of age. He is the middle child of Dale Moss Sr. and Delores Moss. His father is black and his mother is white due to which her family disapproved their relationship. He is highly inspired by his mother who was a basketball player and even represented the United States as part of the Women’s National Team.

Dale grew up with two biological sisters; Amber and Robyn Moss. His elder sister Amber is physically disabled and she participated in Special Olympics in South Dakota. Besides, his other siblings include sisters named Jessica and Candace.

Dale educated at Brandon Valley High School in Minnehaha County, South Dakota. There, he enjoyed playing basketball, football, and track and field before graduating in 2007.

Also Read: What Happened To Amanda Stanton? Her Relationship, Net Worth & Facts

Afterward, he attended South Dakota State University and played as a wide receiver for a year. Moreover, he played colligate basketball for four years. He graduated from South Dakota State University with a BA in Business/ Managerial Economics at the age of 23 in 2012. He has an athletic body with a height of 6 feet 4 inches (1.93 meters) and a weight of around 215 lbs (98 kg).

His Career in NFL

However, the Buccaneers released him on 13 November 2012 and he signed with the practice squad of the Chicago Bears. On 19 June 2013, the Carolina Panthers signed him and later he was waived on 24 August 2013. Afterward, he was assigned to the Los Angeles Kiss of the Arena Football League on 15 January 2014. He ended his NFL career with the Chicago Bears in 2016.

His Recent Job & Net Worth

Dale now holds his job as an entrepreneur, following his NFL career. In 2014, he founded Moss Martin Media and began working in video production for the world’s top sports, fitness, and fashion and lifestyle brands.

Moreover, he works as a fashion & fitness model at Wilhelmina International Inc. He now serves as a host on The Game Plan Podcast since 2018.

The talented personality is likely to enjoy a net worth in millions from his multiple professional ventures. As an entrepreneur, he makes the remarkable yearly earnings. Besides, he makes big money from brand endorsement with various products so far.

Relationship With Clare Crawley On The Bachelorette

The 31-year-old competed on the 16th season of the ABC dating competition reality show The Bachelorette in 2020. He was one of 42 potential single men chosen to compete for Clare Crawley on the dating show.

Just after 12 days of filming, Clare quit the show due to falling for Dale. It was rumored that Clare fell with Dale before the filming of The Bachelorette. Moreover, it came to light that the duo recently got engaged as of August 2020. However, both Dale and Clare have not confirmed the news of their relationship so far.

Some Interesting Facts About Dale Moss